Birth and the OBE: An Unhelpful Analogy

An earlier version of this paper was presented as a research brief at the Twenty-Sixth Annual Convention of the Parapsychological Association, Madison, New Jersey, August 9-13, 1983.—Ed.

I wish to thank the Perrott-Warrick Studentship for financial support and Celia Gouge and other members of my classes for help in collecting the data.

Honegger has suggested that OBEs are lucid dreams in which the specific imagery is due to a fetal OBE occurring during birth. This leads to the prediction that people born by Caesarean section should be less likely to have OBEs. A questionnaire on dreams, OBEs, and type of birth was completed by 254 people. Honegger’s hypothesis was not supported. OBEs and lucid dreams were significantly associated with each other and with having hypnagogic imagery, falling dreams, false awakenings, and the ability to control dreams.

From time to time an analogy has been drawn between the OBE (out-of-body experience) and the experience of being born. There are several superficial resemblances. Very often an experience of rushing along a tunnel or tube is reported before or during OBEs and in near-death experiences (see Blackmore, 1982; Sabom, 1982). This has been likened to the passage along the birth canal. Vibrations are frequently described at the start of an OBE and have been compared with those which a baby might experience from the contractions of labor (Honegger, 1983). Perhaps most often cited in this connection is the “silver cord.” In traditional astral projection lore (e.g., Muldoon and Carrington, 1929), a silver elastic cord connects the physical and astral bodies and is only broken at death.

This has been likened to the umbilical cord which is cut at birth. Finally, of course, birth does involve a kind of leaving the body. Janet Mitchell (1981) points out the analogy in her book. Scott Rogo (1978) has discussed the possibility that the OBE is a sort of rebirth fantasy. He argues that it could contain elements derived from birth experiences, whether or not anything actually leaves the body. Carl Sagan (1979) has even argued that the universality of imagery in near-death experiences can only be accounted for by reference to our shared experience of birth, a theory which has been soundly criticized by Becker (1982).

Recently the same analogy has been made an explicit part of a theory of the OBE by Barbara Honegger (1983). She argues that the OBE is a special kind of lucid dream in which the specific features of the experience are attributable to a fetal OBE occurring at the time of birth. The stress under which the baby is born triggers the original OBE and this is why OBEs in later life are associated with vibrations and tunnel, cord, and out-of-body imagery.

This hypothesis can claim some support. As Honegger points out, there is strong evidence for an association between OBEs and lucid dreams. Apart from phenomenological and physiological similarities (Salley, 1982), there is plenty of evidence that the same people tend to report both kinds of experience (see Blackmore, 1982). Also, I believe it is a useful strategy to seek to explain the OBE in two stages. That is, to account first for the state in which it occurs and second for the reasons for the particular type of imagery.

However, there are drawbacks to the fetal-OBE theory. Cords in fact are rare in OBEs, being found in less than 10% of the reported cases, in spite of the occult tradition (see Blackmore, 1982; Green, 1968a). Also, alternative explanations have been proposed which are at least as convincing (e.g., Eastman, 1962). The same can be said of the tunnel experience. This occurs in many altered states of consciousness, not specifically in the OBE, and appears to be commonly induced by certain drugs (Drab, 1981; Siegel, 1977). There may well be both psychological and physiological reasons why hallucinations so often take a tunnel form (Blackmore, 1982; Siegel, 1977). There are serious theoretical obstacles also. If one takes the point of view that complex cognitive processes are involved in the OBE and the “out-of-body” perception it entails, then the fetus would not be expected to be capable of having an OBE. Conversely, reliving a fetal experience (if that were possible)could not have the complexity, structure, and perceptual detail of an adult OBE. One would still have to explain much of the phenomenology of the OBE in other ways.

Having said all this, the fetal-OBE hypothesis has the merit of being testable and is certainly worthy of being tested. Our current understanding of the OBE is extremely limited and any evidence either for or against a theory of the experience would be a welcome addition to our meager knowledge.

The study reported here attempted to test this. A questionnaire was given to people born normally and by Caesarean section. It asked about various aspects of dreaming, OBEs, hypnagogic imagery, and tunnel experiences.

In addition to testing Honegger’s hypothesis other questions were addressed. It is not known why the same people have OBEs and lucid dreams, nor what makes a waking OBE so similar, experientially, to a lucid dream occurring during REM sleep. It might contribute to our understanding of this relationship to know which other related experiences are also reported by the same people. Being able to control one’s dreams and having hypnagogic imagery may be important. Lucid dreams often seem to be triggered by attempts at controlling dream content (Green, 1968b)and several methods said to induce OBEs make use of hypnagogic imagery and dream control in the process (Rogo, 1983). Flying and falling dreams have been compared with OBEs (Muldoon and Carrington, 1929; Twemlow, Gabbard, and Jones, 1980). Also comparable are false awakenings; that is, a person seems to wake up only to find that in fact he is still asleep and only dreaming he awoke (Fox 1962, Green 1968b). The questionnaire included questions about all these experiences.

The questionnaire was completed by 234 people. Most of them were members of psychology and parapsychology adult education classes in Bristol, England. Some (37) were from the author’s classes but none had taken part in previous surveys of this kind. From this sample so few had been born by Caesarean section that an advertisement was placed in the Medical School at Bristol University asking for anyone who was born by Caesarean to fill in a questionnaire. Nothing further was said about the questionnaire. An additional 22 “Caesareans” were obtained in this way.

The sample was clearly not random and the figures for incidence cannot be generalized. Also, the group obtained by advertisement was likely to differ from the class groups (see below). However, the sample was thought adequate to test the main hypothesis, that is, whether type of birth is related to OBEs and lucid dreams.

Respondents were asked their age and sex and there were nine questions about the various experiences, each asking whether the respondent had had a particular experience and listing as possible answers: “No,” “Once,” “2-5 times,” “5-20 times,” “More than 20 times,” and “Can have one at will.” A final question asked whether they were born normally or by Caesarean section.
The questionnaire is given in Appendix A.

The data were filed in the University of Bristol computer and the package “Minitab” used to produce frequencies, percentages, contingency tables, and correlations. Two by two contingency tables were constructed for those who had and had not had each experience and chi-square values were calculated for each.

There were 158 females (68%) and 73 males (32%) in the sample. Three did not give their sex. The average age was 35.3 years.
Table 1 shows the numbers and percentages of those reporting the various experiences.
Table 2 shows the interrelationships between the different experiences in terms of chi square. Kohr (1980) has argued that for large samples, the chi-square test gives significant values with very weak associations and that correlation provides a better analysis.
Table 3 shows the equivalent correlation matrix (Pearson product moment correlations).
Table 4 shows sex and age differences.

Values given are for chi squared with 2 degrees of freedom, comparing those who do and do not claim each experience. All significant associations are positive, except for birth type see text. * p>.05. ** p>.01. *** p>.001.

Of the 234 respondents, 190 (81%) had been born normally and 36 (15%) by Caesarean. Eight (3%) did not know how they were born. Not surprisingly, those born by Caesarean were younger than others; t = 7.0, df = 65, p  = .01, reflecting the fact that the operation has become more common in recent years. (These figures do not reflect the actual proportion of Caesarean births in Britain because of the sampling method.)

Twenty-nine percent reported having had at least one OBE and, of these, 79% had had more than one. Three people (1%) claimed to be able to have an OBE at will. As previously mentioned, the figures for incidence cannot be taken as representative of the general population. 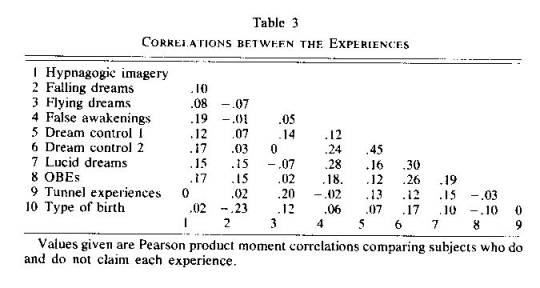 Honegger’s hypothesis was not supported. There was no significant relationship between OBEs and type of birth, nor between tunnel experiences and birth. Those born by Caesarean section claimed slightly fewer OBEs; Χ2 = 1.5, df = 1; n.s. and the same number of tunnel experiences; Χ2 = 0, df = 1; n.s. as those born normally (see Tables 2 and 3). Type of birth was related to two experiences. Those born by Caesarean were more likely to claim that they could control or create a pleasant dream and less likely to report falling dreams.

A complication in testing this hypothesis might arise if the group obtained by advertisement differed significantly from the others in the number of OBEs experienced. However, if these subjects are dropped from the analysis there is still no relationship between type of birth and OBEs; Χ2 = 0, df = 1; n.s.

Sixty-one percent of respondents claimed to have had lucid dreams, 96% of these claiming more than one. Six persons (3%)claimed to be able to have them at will.

There were two questions about dream control. The first asked about the ability to stop unpleasant dreams and the second about the ability to control or create nice dreams. Both were highly associated with each other, but it is the second of these which seems better to predict who will have the other experiences (that is,  OBEs,  lucid  dreams,  false  awakenings,  and  hypnagogic  imagery). Other relationships are shown in Tables 2 and 3.

Those reporting hypnagogic imagery were younger than the others. Lucid and flying dreamers were more often male. Otherwise there were no age or sex differences (see Table 4). It should be noted that 55 chi-square tests were carried out. The weaker associations should therefore be interpreted with some caution.

These problems aside, the pattern of relationships seems to show a cluster of experiences in which dream control and false awakenings, both strongly associated with each other, are central. These are related to lucid dreams, hypnagogic imagery, and OBEs, and less strongly to type of birth and falling dreams. Having flying dreams and having tunnel experiences are unrelated to any other experiences. If these findings are confirmed they may imply that there is something crucial in the ability to control one’s pleasant dreams which aids in having lucid dreams and OBEs.

Honegger suggested that OBEs are lucid dreams in which the imagery is dependent upon the birth experience. The association between OBEs and lucid dreams was confirmed here, at least to the extent that the same people report both. However, the predicted relationship to birth experience receives no support at all.

A better test of the theory might separate those born by elective or emergency Caesarean, and one could also look for differences in OBEs among those with a traumatic birth of any kind. However, since the theory has failed this first simple test I think we can say that the comparison of the OBE with birth experiences is a superficially appealing analogy but, in terms of prediction, an unhelpful one.

Blackmore, S. J. Beyond the Body: An Investigation of Out-of-the-Body Experiences. London: Heinemann, 1982.

Kohr, R. L. A survey of psi experiences among members of a special population. Journal of the American Society for Psychical Research, 1980, 74, 395-411.

Muldoon, S., and Carrington, H. The Projection of the Astral Body. London: Rider, 1929.

Thank you very much for completing this questionnaire.
Sue Blackmore